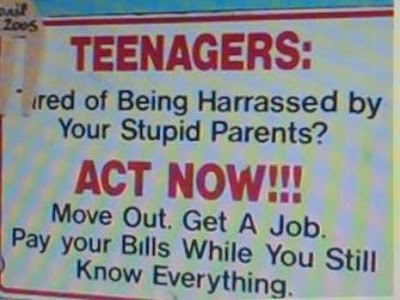 There has to be consequences to our actions, I think everyone who subscribes to this lifestyle agrees with that. I also think that they need to be consequences that deter us from doing what we are being punished for.  Our son was punished last night.  You see, I didn't tell you the rest of the story from my last post, so I guess this should be titled part 2....but if you didn't read it, I think this can probably stand on it's own.

So I told you about the bad grade notice, I told you about my head nearly popping off my shoulders when I found out that he could correct his tests and didn't "need" to.. but I didn't tell you what happened after that.  Well... part of my head nearly popping off was a lot of yelling... a lot of hurt feelings...  Boy was sent outside for something and when doing that kicked a nice big dent in our metal garage about waist high.  I still don't know if he meant to do damage or if he didn't realize that it would cave like it did... but damage was done.  S says he can bend it back out... but I'm not stupid, it will never be the same.  It left a mark for us to remember every time we go to the garage.

Neither S nor I ever break things in anger... we don't hit things... we don't do that, we just don't.  I am sure he was trying something new to see how it would work for him, and we needed to make sure that it didn't work for him.  We needed to make sure that the last thing that he would do in the future when he gets angry is hit or kick something!  We explained to him the night that he did it that the following night he would be punished.  It was late and we had no energy to put into this, not the way it needed.  I'm not going into his punishment here, I know there are people out there ready to pounce on people who discipline their children and I'm not getting into any pissing contests.

We told him the night before for a few different reasons... one of them to get his head wrapped around the idea... one of the others was to for him to be bugged about it.  One of the worst parts of being punished is knowing its coming!

Last night came, S and I were very unsettled by the whole thing... we were very sad that our son had brought us to this point.  The punishment wasn't the unsettling part, it was that fact that we were here and we had never been "here" before... we had a job to do... and we needed to follow through.  It sucked to know that I had to punish my son who I love so much!  We talked first... we talked about anger and ways to work out anger besides hitting something.  We talked about domestic violence and how we are concerned for his future family if he thinks that hitting and kicking is a way to express anger and frustration.  We talked about taking responsibility... owning our own junk... it was pretty much me talking, Boy "listening" and S pacing.

Enough said... Boy had nothing to say... S sent him to his room, followed him in... punished him.  I know it was so hard for S to do, he wasn't angry but maybe a bit sad.  He would give his life for that boy, but he knew he had to make sure the boy knew that his actions were unacceptable.  The Boy played it hard... tried playing us against each other.  We were a united front, a couple of years ago we could never have been so strong... we would have never have known how important follow through really is.

I love my family... each and every one of them are so precious to me.  I do so love our children even if they do have a tendency to drive me crazy.  I so appreciate S for his roll as the head of our home, he does such a good job.  I now have a new understanding of his roll in our home and how hard it must be to punish me when I am out of line... and why he tries so hard to guide me away from problems so that he doesn't have to punish me.  He loves me... he loves all of us... and it hurts his heart to punish any of us... but I know he only does it because he loves us and wants only the best for the family.

This whole situation puts a whole new light on Dd.  It makes me realize just how hard it is for the HOH.  Sometimes its tempting to "brat" to get that spanking that we think we want when in reality our guys just want to have a wonderful Utopia where we all act the way we are supposed to without the threat of a punishment at all.  It gives me that much more incentive to be submissive to my husband, even when he doesn't act like I think a disciplinarian  should act.

All this said, that doesn't mean I won't ask respectfully for a spanking that I think I might need... a reset or even admit that I need a punishment.  I know he will oblige me... he always has.... that's his job, to make sure that his family is taken care of and if one comes to him needing help, he will go out of his way to help.

Besides, there are most generally fringe benefits to punishing me.  **wink**

P.S. To whom it may concern... there were no teenagers marked or maimed in the writing of this blog!!
Posted by Mikki at 2:53 PM