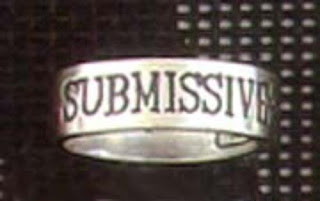 I think we are all always looking for a new turn on... a new fix...a new something that arouses us the way we haven't before!  When you are married for 15 years in a ho-drum life and all of a sudden have found the answers to prayers.... it's all a turn on!  A lot of times you see, hear or smell something that is totally non sexual and it turn you on beyond any reason!!

Yesterday a friend emailed me and asked if I had a certain movie in our collection of DVDs so I got the case out and browsed.  After seeing that I didn't have it, I set the case on the floor beside me to put away later.  S said "put it away now".. not ugly.. not mean... stern.  I don't have a problem with not putting stuff away, so I was for a second not understanding why he would act that way... till I looked at him and he had that look like,- cuz I'm the boss-looks.  I was instantly turned on!  I decided to play his game, got up and put them away.  After we played around that night I asked him what that was all about and he asked "did it turn you on?"  HHmmm..... yeah... it did.  He said.. "thats what it was about"!  He's getting it!!  Yeah!!

Lights on...during play time.  Ever since we have started ttwd he has left his light on.  Never did I "allow" the lights be on our first 15 years and since I have asked him to be my HOH the lights have been on.  I haven't fought it.  At first I was feeling very humiliated so that was a bit of a turn on in it's own right.  I have to say that sometimes I just wish we could turn them off.... but I have found that is when I get tired.  No wonder we rarely had sex... the lights go off and I fall asleep... no wonder I was always so tired!!  I vowed that I wouldn't turn him down now that he was the guy running the show... yet another turn on!  He might be a born leader after all!!

He is really liking it when I ask him what he thinks.  I always made all the decisions and he didn't care.  He does now... about nearly everything!  It feels good... it feels warm... it feels moist!! *wink*

Now, why was I fighting so hard for power before??  HHhhmmmm.... my guess is I had no idea how wonderful it feels to be powerless... to be submissive  I have to make this short today... he has given me my first "chore" and it needs to be done before he gets home!  God I love ttwd!!
Posted by Mikki at 10:30 AM